If crypto wasn’t a highly speculative and technical industry to begin with, imagine combining it with the likes of AI. Artificial intelligence has probably received the same amount of hype too. By definition, artificial intelligence is the creation of machines that will mimic or surpass human capability through speech recognition, problem-solving, mathematical calculation, reprogramming and so on.

Clearly, machines have us beat in many situations. When it comes to an industry like car manufacturing or warehousing, machines are a lot more efficient and safer than we are. They’re also frighteningly adept in many logic-based scenarios.

AlphaGo and its self-taught successor AlphaZero are such examples. The digital brainchildren of Google’s DeepMind AI division in London take problem-solving to the next level. AlphaZero is considered to be the best Chess and Go player in the world. It’s time to rethink the future when AI programs have become game masters in their own right.

So Where Does Crypto Fit In?

Google has the war chest to fund ideas like self-driving cars and neural-network programs. But does it have a governance structure that allows anyone to audit the code for those ideas? Unlikely. The beauty of Bitcoin, of course, is in its open-source model. Anyone with some programming chops can dig into the code and verify the intentions of the program. Blockchain systems, when well-designed, also incentivize users to contribute to the network and get rewarded for their efforts.

These concerns may not be at the forefront of most people’s minds, but to avoid the dystopian future presented by thinkers like George Orwell or the Terminator movies, society may want the option to audit AI sooner rather than later. For now, that means the public will just have to trust that Google has their best intentions at heart. Fortunately, there are projects out there taking the digital currency route. Let’s take a look at a few and find out how they aim to integrate crypto AI into their process.

Probably the most well-known and well-respected crypto AI project in the space is SingularityNET. Unlike a majority of ICO’s the team already has working prototypes which to leverage off, at least from an AI standpoint. SingularityNET is essentially the blockchain arm of Hanson Robotics. Their AI robot, Sophia, has been featured on a number of television shows and even made an appearance at the United Nations.

By bringing AI onto the blockchain, SingularityNET hopes to create the first AI-as-a-Service platform. The team has released a number of Sophia’s AI modules to the public under an open-source license. At the same time, anybody with the skills can create AI services and monetize them on the platform using the AGI token.

You can already view a number of AI services available to interact with via the Beta Dapp. Ultimately though, the team wants to automate the network itself using AI best practices. An interesting if not a little scary thought. Follow along with our comprehensive guide on the project.

A different type of crypto AI, Autonio is a self-proclaimed decentralized AI trading application for cryptocurrencies. The application allows you to build your very own trading algorithms and backtest them on a number of cryptocurrency pairs. Algorithms that achieve a consistent weekly return of 10 percent or greater can be sold to other traders on the platform. Apart from the token sale of NIO that raised around $50,000, the company also generates revenue from a monthly $50 subscription service. 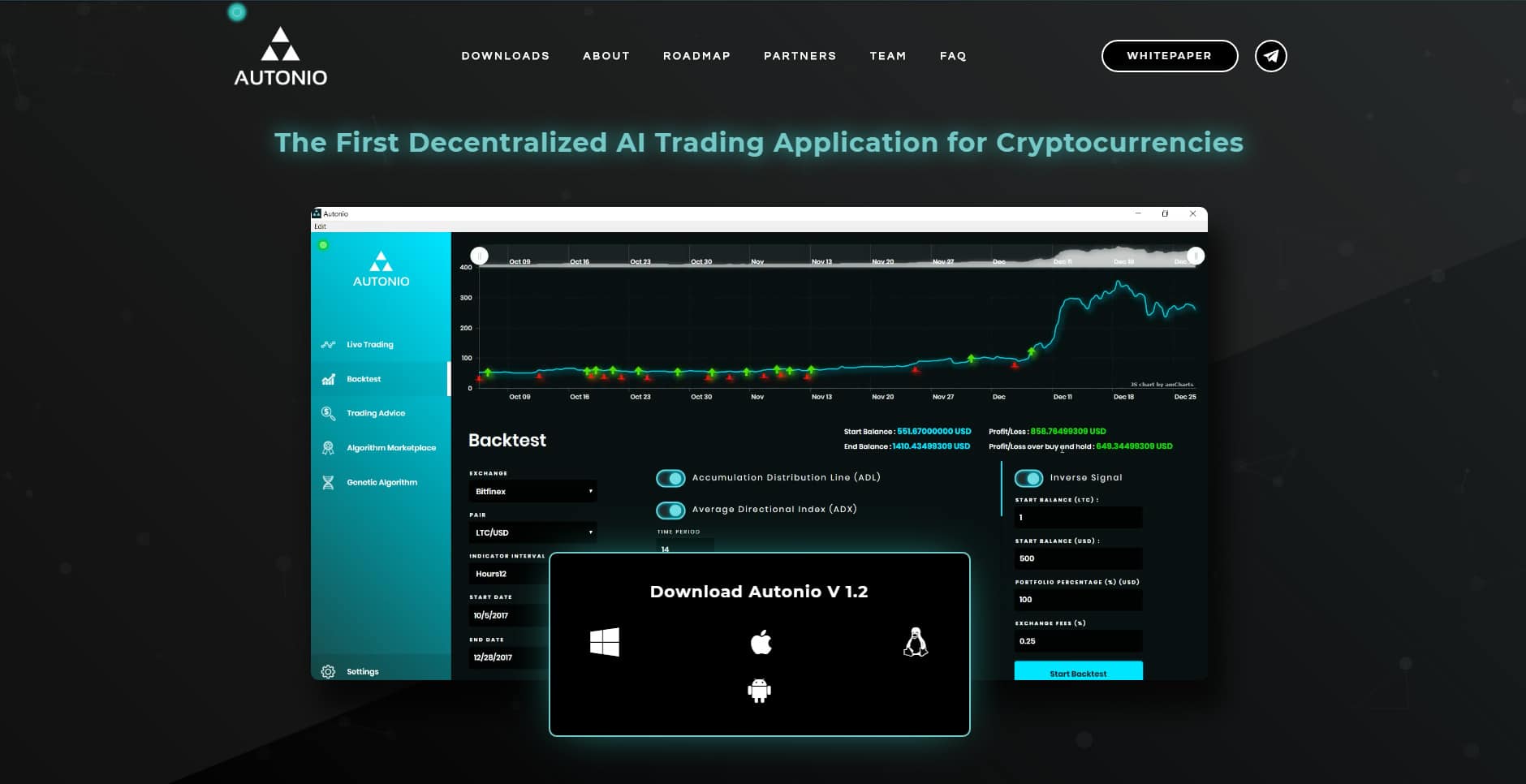 An example of the Autonio application in action

The application allows you to connect to most major exchanges including Binance, Bittrex, Bitstamp, and more. Predictive trading algorithms are quickly becoming a saturated market in the crypto space. Automated trading has long been a feature on Wall Street. In a recent interview on Real Vision TV, notable crypto investor Mark Yusko highlighted how more than 80 percent of all trading these days is done by machines.

There are always two sides to every trade, though, and for every winner, there has to be a loser (Unless the markets only go one way of course). The question then becomes, “Which algorithm will be the smartest?” Fortunately, platforms like Autonio allow you to create your own with basically no programming knowledge. Will that be enough to outsmart the programmers with a deep knowledge of the markets? The jury is still out.

And finally, no roundup would be complete without an amusing project set to change your dating life forever. DateCoin and its token DTC want to be the next Tinder, but on the blockchain. The project claims that by bringing dating onto the blockchain they can tackle core problems of other platforms like fake accounts and advertising bots. How? With neural networks and face recognition technology. That also means integrating some sort of blockchain identification system, which is a tall order considering projects like Civic and SelfKey are already well ahead in the race for that market.

Online dating is a booming business so the potential is certainly there. Machine learning programs have already proved that they can outplay the best Go and Chess players in the world, but can they provide more efficient matches in the dating scene? Who knows. In the meantime, the project may want to brush up on their marketing skills:

Artificial intelligence and automation isn’t a future trend. It’s already here and affecting our everyday lives. Amazon, for example, has over 100,000 warehouse robots collecting, organizing, and shipping goods around the globe. Just like any new technology, AI is just a tool. It’s not inherently good or bad. At the end of the day, it all comes down to the intentions of the creators and users of that tech.

Unfortunately, a large majority of AI-infused cryptocurrency projects are currently focusing their attention on predictive markets. But as they say, “The only sure things in this world are death and taxes.” Predicting markets is probably not the best use of this technology.

AI is a little bit like a Kinder Surprise. No matter how many times you open the wrapper and look at the chocolatey goodness, you never know what you’ll find inside. Crypto, however, has the potential to properly govern the AI process and also provide the right incentives for doing so.