8th largest cryptocurrency by market cap, Litecoin is down along with the rest of the market at about $31 but a crypto trader is still expecting more lows.

“We must Remain Bearish…

Last week, Litecoin remained in the green for the most part as it went from $30 to $33.74 according to the data provided by Coinmarketcap. However, in the last 24-hours, Litecoin fell down in tandem with Bitcoin along with the majority of the crypto market, wiping out all the gains registered last week.

At the time of writing, Litecoin has been trading at $31.27 with 24-hours loss of 5.06 percent. LTC price is in the red by 1.67 percent in the BTC market as well. Currently at the 7th position with a market cap of $1.88 billion, Litecoin is managing the daily trading volume of $676 million. 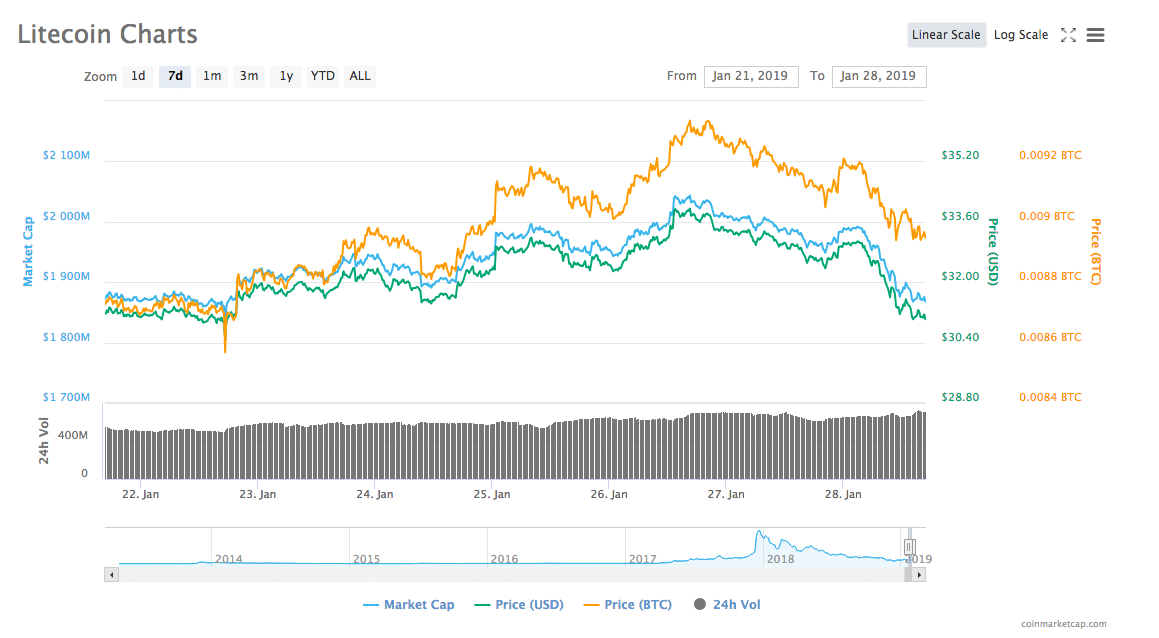 The question is where Litecoin price will go from here? According to Crypto trader Benjamin Blunt, more lows are incoming as he is expecting Litecoin to go down to about $27. He took to Twitter to share,

right on que. $LTC and $BTC falling in an impulsive decline after that expanded flat was completed.

i still dont believe the december lows at $23 will be broken, but at this point we must remain bearish until we see a 5 wave rise from wherever it decides to bottom. pic.twitter.com/SlIjen42A7

“Seeing as LTC was a leading indicator on the way up, it seems it should be one on the way down also. Current PA unfolding bearish with what I assumed was an impulsive rise has now materialized into a corrective expanded flat so i’m anticipating a fall back to at least 27.50.”

A few hours after that, he further stated that though he isn’t expecting Litecoin price to broke the December low of $23, he remains bearish nonetheless.

“Right on que. LTC and BTC falling in an impulsive decline after that expanded flat was completed. I still don’t believe the December lows at $23 will be broken, but at this point, we must remain bearish until we see a 5 wave rise from wherever it decides to bottom.”

Falcon has become the first private bank in Switzerland to do so that also provides the conversion between fiat and crypto that will make blockchain assets “fully bankable.”

“Falcon has once more seized the opportunity to demonstrate its expertise as a market leader in the digital assets space by merging traditional private banking services with innovative financial solutions,” said Martin Keller, CEO of Falcon Private Bank.

Signs of Adoption: Overstock to Pay Taxes with Bitcoin
Ethereum Startup Aragon Weighs Launching a Second Network on Polkadot
Metrics May Point to Ether Being Undervalued